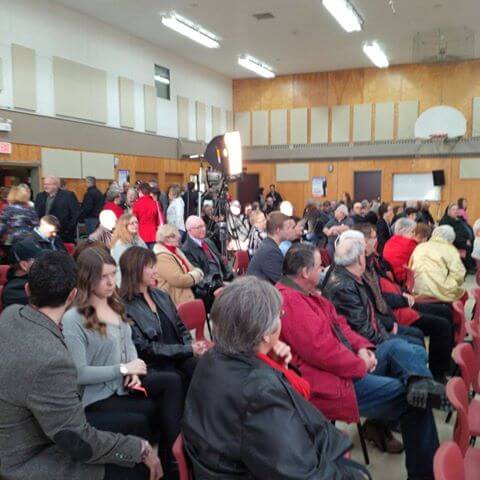 West Covehead – Dropping an Island tartan “writ,” Premier Wade MacLauchlan called on all Islanders to work together to create a better future focused on People, Prosperity and Engagement.

Premier MacLauchlan was joined by the full team of Liberal candidates on stage at the North Shore Community Centre in York Monday night where he received the Liberal nomination for District 9, York – Oyster Bed, in front of a packed room.

“Over the next month our Liberal team will be visiting communities across Prince Edward Island to meet with Islanders about our shared vision that puts people first, consistent with our Liberal values and traditions,” said the Premier. “We will work together to make real and substantive change for Islanders.”

A provincial election will be held May 4. Premier MacLauchlan said that the Liberal team of 27 candidates offers experience and fresh energy. Thousands of Islanders have attended nomination meetings across Prince Edward Island to hear the Liberal vision to work together on priority areas such as the economy and jobs, healthcare and education.

“This speaks to the enthusiasm and energy Islanders feel. It speaks to belief in what Liberals and Islanders stand for. A belief in how a new Liberal government will work together with Islanders to create a better future,” said the Premier.

› / Latest News / New Liberal government led by Premier Wade MacLauchlan will work together with Islanders to create a better future.