Jane MacIsaac announced today that she is seeking the Liberal nomination for the upcoming by-election in District 16, Cornwall-Meadowbank.

Cornwall, Prince Edward Island – Jane is the eldest daughter of Bruce & Irene MacIsaac. She is from a long line of political 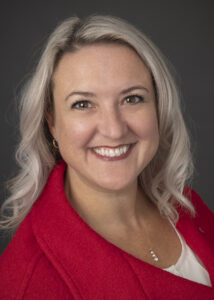 leaders. Beginning with her father, Bruce, who is a former Charlottetown City Alderman. Her sister Jill is currently a Cornwall Municipal Councillor. Alex MacIsaac, her paternal grandfather, was the first PEI Minister of Labour during the Alex Matheson Liberal government.

Jane has been an active volunteer & board member throughout her life and has contributed to many non-profit organizations, including Junior Achievement PEI, the PEI Literacy Alliance, Child Find PEI and most recently, as the Secretary of PEI Citizen Advocacy. She is a lifelong learner holding a diploma in Practical Nursing, a Certification in International Trade and Master of Business Administration. She is graduating with a Bachelor of Science in Mathematics from the University of Prince Edward Island.

Jane is the current Business Development and Membership Officer at PEI Business Women’s Association, where she supports a dynamic network of women entrepreneurs and business professionals across the province. Her lengthy career in international trade spans more than two decades, beginning in Client Services with Canadian Airlines, then Air Canada and eventually as the Chief Inflight Coordinator for various Corporate Aviation operations. From 2008-2013, Jane worked in Trade Development with the Province of PEI (Innovation PEI), where she successfully managed many international trade missions to support the export ambitions of island companies. After completing her Masters, Jane worked as a Strategic Analyst for a global logistics organization in California until she returned home to Cornwall in 2016 to care for an ill family member. The community rallied around to support the needs of the family. That experience and the support they received from the people of Cornwall-Meadowbank reinforced the importance of having strong communities and how they play such an important role in our daily lives.

Says MacIsaac “Cornwall-Meadowbank is a strong, fast-growing community with the best of both worlds that upholds the values of family, community, and progress. It is a place of opportunity that can provide countless possibilities for growth and experience with a community of people looking out for your best interests.”